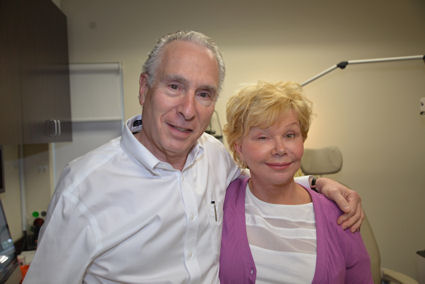 The woman in this photo underwent LASIK surgery in 2006. (She is pictured here with Dr. Boshnick.) About a year later she developed post-LASIK ectasia in both eyes. In 2008, in an effort to correct her distorted corneas, she underwent another refractive surgical procedure known as CK (conductive keratoplasty). In March, 2014 the right corneal LASIK flap became dislodged and her cornea perforated. A emergency corneal transplant was performed to restore vision. To prevent rejection of the corneal transplant she was placed on steroid drops which caused a sharp spike in the intraocular pressure of her right eye to over 50 mm Hg. To bring the pressure down a shunt was surgically placed into her eye. Although her intraocular pressure was reduced to a normal level, irreversible damage was done to her optic nerve. She is now blind in her right eye. This case is an example of what we refer to as the domino effect of unnecessary eye surgery. 3D models of Lasik and Lasik over RK corneas