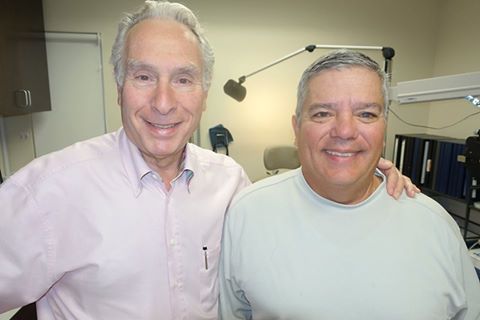 This patient underwent LASIK surgery in both eyes in 1998. 2 years later when his vision began to fail he underwent a 2nd LASIK operation in 2000. In 2004 his left eye suffered a complete 360 degree retinal detachment which led to complete vision loss in this eye. In 2014 this patient’s left eye became extremely painful. He visited a number of eye doctors earlier that year seeking relief from the pain. None of the medications given to him worked to help this patient. In November, 2014, this patient visited our office. We noted at this visit that the patient’s left eye was extremely inflamed and that this eye was completely blind and without light perception. When we examined his left eye with a technology known as “optical coherence tomography” or OCT, it was apparent that the LASIK flap in this eye was separating from the underlying cornea. In addition, the outer layer of the cornea was coming “undone” a condition known as bullous keratopathy. In an effort to avoid the necessity of having this patient’s left eye removed we fit his left eye with a GVR Scleral lens. The intention was to protect this seriously damaged eye from the environment and the blinking action of the eyelids. In addition, by covering the exposed corneal nerves with this lens we were hoping that this patient would not experience pain any longer. For the past 12 months, this patient has been wearing his scleral lens comfortably on a daily basis without any pain or discomfort. In the photo below left you can see this inflamed, cloudy blood vessel laden cornea. The “OCT” image below right shows a cross-section of the damaged cornea. The 2 curved lines at the top of the image represents the front and back surface of the GVR Scleral lens. The space between the back surface of the lens and the front surface of the cornea is filled with saline solution. The curved convex images on the corneal surface represent the outer layer (the corneal epithelium) of the cornea separating from the underlying cornea much like wall paper coming off of a wall. The horizontal split within the cornea is the LASIK flap separating from the underlying corneal stroma. This patient visited us last week for his semi-annual examination. He has been very happy with his scleral lens as without it he suffers from unbearable pain.