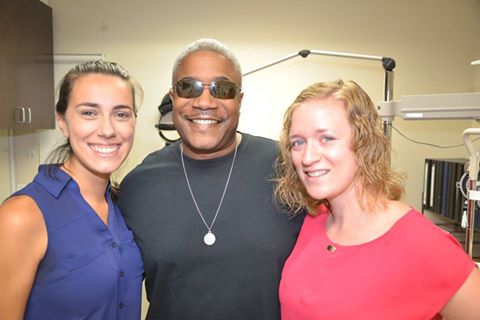 This is a photo of our student externs Shelsea Krilling on the left and Victoria Galbreth on the right. In the center is our very special patient Troy Thomas. In 1991, Troy lost virtually all of his vision due to an extremely rare condition known as “Stevens-Johnson Syndrome.” In 1991, Troy received a penicillin injection. 3 days later Troy noticed that he was literally burning up. When he went to the emergency room and had his clothes removed, there were blisters and erosions on the skin over his entire body. He developed a fever of 106 degrees which lasted for 4 days. Troy’s vision loss was almost immediate. He was unable to open (and to this day cannot) his right eye. The vision in his left eye was extremely limited. For 13 years his eyes were in constant pain. Troy’s vision loss forced him to drop out of college for a few years. He was unable to drive and became dependent on others. Over these many years, Troy used a variety of low vision aids to get his college degrees (he has a Master’s degree). On August 20, 2004, Troy visited our office. We fit his left eye with a GVR Scleral lens which not only allowed Troy to see 20/20, but immediately eliminated all of his ocular pain. After several months of follow-up visits and lens adjustments, Troy was able to get his drivers license the following November. Over all these years, Troy has done very well with his scleral lens. In 2013, Troy underwent corneal transplant surgery in his left eye. Because of this event we refit Troy’s left eye with a redesigned scleral lens which is still providing Troy with clear (20/20), stable, comfortable vision. Troy’s determination and positive outlook on life is, I’m sure, an inspiration to all who know him. It certainly is for me. In the photo below can be seen Troy’s left transplanted cornea. If you look carefully notice the cloudy, blood vessel filled (neovascularized) peripheral cornea. This is how Troy’s entire cornea looked before his corneal transplant.