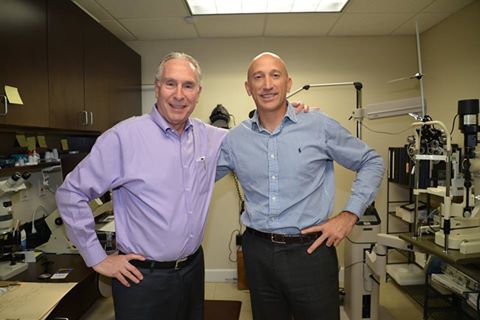 This patient underwent LASIK surgery in 2001. 18 months following his LASIK surgery, his vision started to decline. Eyeglasses and contact lenses over the following years failed to provide comfort and quality vision. Collagen Cross-Linking and Intacs surgery was done in 2009. Later that same year conductive keratoplasty (CK) was done on both eyes. What makes this case and this patient so interesting is that in 1999, he was a nationally ranked tennis player in the under 35 age group. In 1999 he won the the amateur court tennis doubles championship. Several years after undergoing LASIK this patient was forced to give up driving. However, he still participated in national tennis tournaments often taking a cab to the event and still winning many tournaments. When asked how could he perform even though he had a problem seeing the ball, he responded that his body could feel where the ball was. This patient has developed post-LASIK corneal ectasia. When he first came into our office his visual acuity with eyeglasses was an unstable 20/50. We fit him with GVR Scleral lenses which are providing him with 20/20 vision in each eye with all day comfort and stable vision at night, indoors and in bright daylight. Lasik in 2002, Vision Good for 4 Years, Then Ectasia. Treated with GVR Scleral...